The start of the Perth Volunteer Fire Company.

Clarence Joslin located a surplus army truck at the Army Depot and a woman in Broadalbin took the mortgage on the truck.  The Town of Perth donated the old barn which was about the size of a two car garage and was located on the other side of the creek from where the original firehouse was located on RT#107.

The old barn was fixed up and a small meeting room was made. A small siren was bought from Sammonsville, and also the No.9 School bell was used to give the alarms for fire.  When Amsterdam had an air raid siren for sale, it was purchased, and a farmer who had a windmill donated it to mount the siren on.

When the one-room schools closed and students began attending the new central school, the Old School House No. 9 was put up for auction.  The Perth Volunteer Fire Department bid $1,800.00 for it and all the school taxpayers in that district received a check which almost donated right back to the fire department and that was the beginning of the "new" firehouse.  Gradually the firehouse had been enlarged with three stalls for the trucks, a well equipped kitchen, rest rooms, a large dance hall and storage space underneath the firehouse and room for two more trucks. 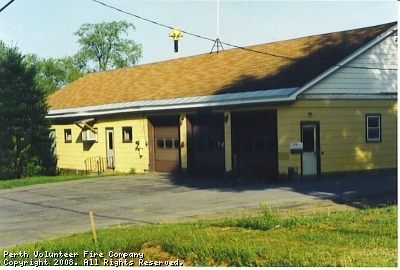 At the start, the trucks were old used vehicles; the first was a 1942 GMC and also a 1937 Diamond T.  In 1950's a 1951 Ford pickup truck was purchased.  In 1960, two new International trucks were purchased, a pumper and a tanker.  In the next few years, a post office truck was acquired and converted into an emergency van and a jeep was purchased for grass fires.  In 1974 a new American Pumper from Battle Creek MI was bought.  This truck was diesel powered and the first of its kind on the east coast.

On November 17, 1949 at the Perth Central School the first organizational meeting of the Perth Volunteer Fire Department Ladies Auxiliary was held.  The meeting was opened with remarks by Mrs. Ritchie of Glen, New York and Mrs. Lewis Banta of Hagaman acted as Secretary Pro Tem.  Mrs. Uhlinger of Hagaman conducted the election of officers and those elected were: Mrs. George Daye, President; Mrs. John Wellinger, Vice President; Mrs. Edward Mack, Treasure; Mrs, John Wellinger, Mrs. William Donneburgh and Mrs. James Donohue were appointed as By-Laws Committee.  There were ten charter members at that meeting.  By the end of 1950 there were thirty members.

In February 1954, Mr. John Harrington, Secretary of the Perth Volunteer Fire Department sent a letter to the auxiliary requesting a committee to discuss plans for a new firehouse.  in November of 1956 Mr. Walter Fields met with the auxiliary to make plans for the kitchen in the firehouse, for which the Civil Defense would provide some of the needed articles.  The first regular meeting of the auxiliary was held at the firehouse on September 12, 1957.

The ladies auxiliary has held many fund raising projects to help the firemen acquire needed equipment.  Some of those were food sales, card parties, selling greeting cards, a cook book.  In October of 1970, as a community project, the auxiliary sponsored a Memory Tree to be a feature of the holiday season.  They invited all residents of Perth to donate toward a light on the tree in memory of a family member or a friend.  An evergreen tree was purchased and planted in front of the firehouse but the response was so great that another tree had to be purchased in order to hold all the lights.  On Thanksgiving Day 1970, a prayer service was held at the firehouse and the memory tree lit, to shine each night throughout the holiday season.  This tradition is still carried on and provides a very cheerful setting in Perth Center.

In 1997, the fire company purchased new, an International engine equipped with 1500 gallons of water and a 1500 gallon per minute pump. This engine was the first of its kind in this area because it featured an enclosed pump compartment for the operator and was equipped with a compressed air foam system (CAFS). This system proved to be very efficient in rural fire companies due to the lack of fire hydrants.

For an estimated 10 years in the planning under the direction of Chief Lesniewski and the building committee, the current location of the fire station was open in the spring of 1998.  The nearly 10,000 Square foot facility was built with the hope will it may serve the fire company for years to come.

In 1999, six dry-hydrants were installed throughout the town of Perth. Also at this time Fulton County switched their low-band communications to a hi-band system with the help of a County grant to purchase new hi-band minitors, mobile radios and base radios for each fire company to correspond with and improve the communications.

In 2001 a grant from Senator Farley's office was received for $15,000 to purchase new sets of turnout gear and some compliance upgrades for the contained breathing apparatus. Also in 2001 a $1000 matching grant from the NYS Department of Environmental Conservation was received to purchase forestry and grass fire equipment.

In 2002 the fire company purchased a used GM suburban to the fleet.  This vehicle was used to respond to EMS alarms, Fire Police Training and as a transportation vehicles to and from the fire scene.  An old school bus was purchased from the Greater Amsterdam School District in 2003 and converted to be used as a light rescue apparatus that would be reconstructed to carry a mobile cascade air system. This apparatus also is utilized as a firefighter rehabilitation area for major alarms and can be used for various transportation and as a resource vehicle (command).

In 2003, The Perth Volunteer Fire Company was awarded a $116,000.00 FEMA Grant which resulted in the purchase of a  Breathing air compressor (Cascade), Thermal Imaging Camera, Jaws of Life and SCBA's upgrades.

In 2004, the fire company received a NYS Grant from Senator Farley's office for $12,000 to purchase turnout gear and compliance upgrades for the SCBA's. Also in 2004 a NYS EN-CON Grant in the amount of $1,000 for additional gear was awarded.  The fire company was also able to purchase an Automatic Electronic Defibrillator (AED) in 2004.

In 2005, it was time to replace one of the fire companies oldest pieces of equipment, a 1974 American engine.  The new fire engine is a demo 2003 Rosenbauer chassis with a 2005 Central States body equipped with compressed air foam and carries our Jaws of Life, on scene lighting, cribbing for stabilization, and various hand tools.

In 2006 and 2008, the fire company was able to obtain two more grants from Senator Hugh Farley's office, both in the amount of $15,000. The grant money received in 2006 was used to purchase 15 minitors for the members, 4 portable hand held radios and 4 sets of turn out gear. With the grant money in 2008, 15 more minitors, 5 sets of turn out gear and 15 EMS first responder bags were purchased.

In 2009, the members of the fire company decided it would be detrimental not to respond to all EMS calls in the Town of Perth. In doing this, the fire company added a 2006 Chevy Tahoe to its fleet. (12-3-1) The suburban used for EMS response in the past was now being used for fire police and training and would be labeled 12-3-3.

In 2017 the fire company purchased a 2017 Ford F-250 four door pickup with money saved over the years. This truck is used for fire police duties and transport firefighter to training locally and at the academy. It is equipped with many traffic cones, barriers and signs to use for emergencies. This truck is also equipped with an EMS firest in bag and is utilized as a back-up for EMS alarms.

In 2018 the fire company was fortunate to purchase a used 2001 American LaFrance 75' ladder truck from a fire company in Saratoga County. This piece of apparatus is equipped with a 6-man cab, 500 gallons of water and a 1500 GPM pump.

In 2020 the fire company ordered a new engine that would replace both the companies 1998 International 1500 gpm/1500 gallon first line engine and its 1987 GMC tanker with a 1000 gpm/ 1500 gallon with a new Fort Gerry 2020 Spartan 2000 gpm/ 2700 gallon engine delivered february  2021. The concept behind the amount of water the truck would carry is to respond with as much water as possible for an initial attack. Due to membership numbers sometimes during the day the second tanker would not make it to the call. This apparatus was delivered and put into service in April of 2021.

In 2021 the fire company purchased a used 2001 International Rescue Truck from a volunteer fire company in Vermont to carry the companies auto extrication equipment and mobile cascade. The mobile cascade had been sitting in the station since for the past 5 years due to the removal of a used short bus that was converted as a rehab bus.

In Closing, without the generous support from our community, through the Memory Tree Fund drive program, numerous contributions, the Ladies Auxiliary, grants received and our dedicated members; we would not be able to obtain the equipment that is needed to serve our community today and in the future.

The Members of the Perth Volunteer Fire Company, Inc. 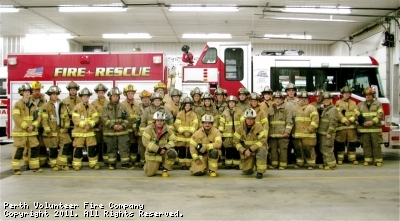 Recent calls
MVA with Injuries
Perth & Gavac were dispatched at 0654 hours to a 1 car MVA with injuries on County Highway 107. Perth 12-5-2 arrived with Gavac and PD and removed the 0ne patient with a leg injury from the vehicl...
Read more »
Structure Fire
Perth and Broadalbin Fire was dispatched at 1024 hours for a structure fire on McQueen Rd in the Town of Perth. Units arrived to find a residence that had heavy fire in the garage and west side of the...
Read more »
MVA w/ Injuries
Perth Fire dispatched at 2042 hours for an MVA with unknown injuries on County Highway 107, police on scene requesting FD. Perth Fire arrived on scene to find a one car MVA, vehicle went through a tel...
Read more »
Apparatus gallery

This site has been viewed 395,610 times.
Calls
News
Events
Pictures
Apparatus
Maintained by the members and staff of Perth Volunteer Fire Company. Designated trademarks and brands are the property of their respective owners. Copyright © 2006-2022. YourFirstDue Inc. All Rights Reserved. Content on this web site is supplied by Perth Volunteer Fire Company. YourFirstDue Inc. cannot be held responsible or liable for any content, text, pictures, or any other media found on this web site.
Management login
Powered by